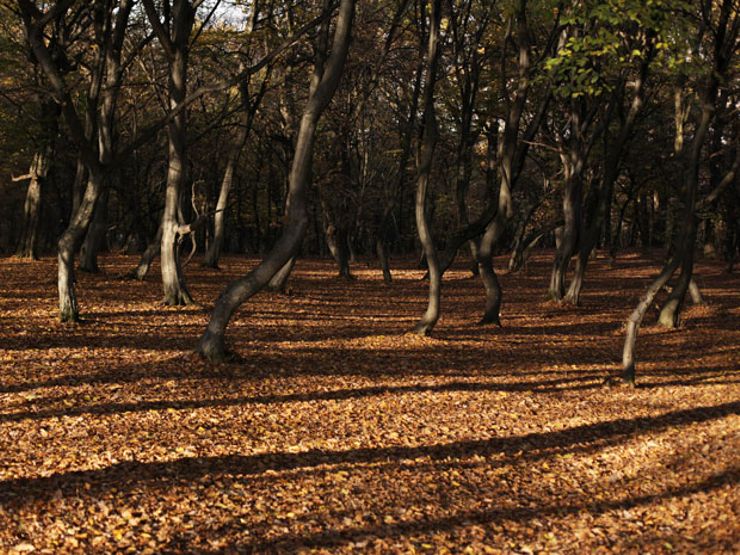 Deep in the heart of Transylvania, the Hoia Baciu Forest is one of the most haunted forests in the world. It located in the west of an ancient town Cluj-Napoca, a northwestern Romanian city.

The exact age of the forest is unknown, however, the only credible source available is from 55,000 years ago. The forest itself covers an area of 295 hectares of land, it also includes the earliest Neolithic settlement unearthed in Romania. Apparently, Vlad the Impaler was beheaded in the forest. The Starevo-Koros-Cris tombs and houses belonging were all discovered in between 1960 and 1994. During the middle ages, hundreds of peasants were taken into the forest and violently slaughtered by a raiding party. It is difficult to decipher whether the slaughterings were a form of primitive population control or a religious offering, but those diabolical activities left a tragic, vengeful imprint on Hoia-Baciu Forest. Even the strangely distorted trees are said to host the souls of murdered peasants, and pairs of green eyes appear at twilight in an unnatural mist. The ghosts of peasants are held liable for the peculiar disappearances in the forest.

The Hoia Baciu Forest hardly translates into Shepard’s Forest and attainted its name after a Romanian Shepard ventured into the forest with his 200 sheep looking for pasture when he found the infamous Hoia Baciu Forest Circle. He never returned, nor did any of his 200 sheep. Many question the thought of a shepherd in charge of 200 sheep wandering into the forest. The legendary forest has been frightening locals for hundreds of years, even presently they fear to enter the forest after nightfall.

In Hoia-Baciu Forest, it is said that more than 1,000 people have disappeared without a trace within the forest. One famous case involved the disappearance of a 5-year-old girl who appeared after 5 years later. She wore the exact same clothes she had been wearing 5 years ago. Remarkably, her clothes were found to be in good condition and she had a 9th-century coin in her pocket. She had no recollections of where she was or what had happened to her in the forest. Subsequently, five other people who ventured into the forest were found dead.

During 1968, a biologist called Alexandru Sift came to research light and magnetism phenomena. He wanted to investigate the reason behind the bizarre zig-zag patterns or clockwise spirals shaped trees in the forest. The deeper he journeyed within the forest the stranger and hostile he felt and more twisted the trees become. He spotted eight trees sprouting from a single root with a strong wood that was impossible to cut down. Some of the trees had large charred smudges as if these trees were incinerated. There were strange woodland creatures, shadows and sounds (gigglings) moving amongst the trees, he described as, “The sound of teeth chattering.” Sift clicked photos of an unusual metallic disc-shaped device flying over the forest. Sadly, he died in 1993 and most of the photos he took disappeared.

On the 18th of August 1968, a military technician called Emil Barnea captured clearer photos of UFO,  a craft shaped like a blob or water-droplet hovering in the part of Hoia Baciu Forest where there are no trees, a clearing called the round meadow(Poiana Rotundă). In the 1970s, the Hoia-Baciu forest became known for the UFO sightings. The Communist government regarded supernatural and paranormal activity as insanity and Barnea was fired and never received any unemployment benefit. In 2002, locals recorded a video of a bright coloured cigar-shaped object flying over the sky and disappearing. UFO activity in the forest is so extreme that alien abduction is seen as plausible grounds for the reported missing persons and cases of lost time from the area. Recent reports include unidentified voices in EVP recordings, distorted faces appearing in the pictures that were not present when the image was captured, electromagnetic inconsistencies, batteries discharging (typically occur in poltergeist cases), crashing electronic gadgets, and unexplained lights.

A mysterious circular clearing, where little or no vegetation grows, seems to be the focal point of paranormal activity, known as ‘The Circle” or “Socially Active Point 3“. The soil samples from the Circle were exactly the same as the rest of the forest. In some parts of the forest, radioactivity was elevated due to natural uranium generated by the land. Fenomenele de la Pădure Hoia-Baciuwas published by a Professor of Chemistry and Sift’s friend Adrian Pătruț who pursued his friend’s research. Professor Adrian Patrut, told researchers, “We have enough results to tell you what it is not, it is not something we can possibly hope to understand in this age.” Some say it is an interdimensional portal to another world created by Atlanteans and people who accidentally pass through the gates experience irritation, headaches, thirst, anxiety, fainting etc. There are logical clarifications, such as allergies or scratched by a loose branch. Parapsychology specialists claim that Hoia-Baciu Forest is a doorway through which deceased or uninhabited souls enter Terra. Western esotericism suggests that the Hoia-Baciu Forest can be a gateway between, “the astral plane and the telluric plane“, alike to “Dante’s Purgatory,” where the spirits reside for 40 days until their fates are decided.

Paranormal activity such as people being pushed or thrown to the ground or cameras or bags being violently thrown by sinister forces. A TV show called “Destination Truth,” captured Evan being violently scratched and attacked by an unseen force and the strange orbs of light. He heard female voices behind him before being tossed across the clearing. Orbs of red, orange, yellow, green and white lights were random in their activity and studied by using infrared cameras and thermal detectors. These orbs show intelligence, knowing when they are being watched and do not seem to produce any heat.

Possibly, the forest is a source of ultra-low frequency sound waves, these sounds are imperceptible to the human ear yet can cause Electromagnetic Hyper Sensitivity. People who have been exposed to high EMF’s had symptoms had a cold flush, electric shocks, headaches, migraines, nose bleeds, burning sensations of the skin, fatigue, tiredness, dizziness, nausea, heart palpitation, hallucinations, cognitive and digestive issues. Ultra-low frequency infrasound is generated in thunderstorms, earthquakes, and erupting volcanoes. Contrarily, some wanderers return from Hoia Baciu Forest completely unharmed. The ghostly phenomena are popularised to attract tourists, the round meadow or also recognised as the dead zone can be justified by Archeology.

Thank you for reading, fellow humans.

67 thoughts on “The Hoia Baciu Forest”