Have you heard about these unusual Christmas traditions?

In Iceland, Grýla is a giantess that has a wart-wrapped nose with horns on her head. She is a mother of the thirteen Yule Lads, who dwell in the mountains. She abandons her cave on the thirteen nights before Christmas, hunting for mischievous children. She snatches and eats them in a stew. Previously, Yule Lads robbed things and played tricks during Christmas, like the legend of Yule Cat to scare children into behaving. Presently, Grýla is regarded as spreading Christmas joy and Yule Lads gives a spoiled potato if the children were mischievous.

In Iceland, Jolakotturinn is the acquaintance of Grýla and the Yule Lads. The giant cat is a fashion-sensible and enormously devious cat that devours children who did not receive new clothes as a gift by Christmas. This fosters children to endeavour to receive one new clothing for Christmas and these children would be safe and the cat would move onto the next household.

According to the folktale, a poverty-stricken widow could not provide to decorate a Christmas tree for her children. A spider in the house saw the family’s misfortune on Christmas Eve, composed picturesque webs and in the morning sunlight, the webs turned to silver, and gold and the family was never poor again. Ukrainians use spiderweb decorations that glisten with morning dew to bring fortuity.

Norwegians believe that Christmas Eve invites malevolent spirits and witches, which means that families will hide their brooms to avoid them from being robbed or exploited by the malevolent ghosts.

Caga Tio is a Catalan tradition from Spain, where families construct log figurines, which resides on the dining room table. The family stuffs it with nuts, sweets and fruits each day heading up to Christmas Eve. In the night, the family uses sticks to beats the log to make it expel, its delights while simultaneously singing traditional Christmas songs.

In Japan, Santa Kuroshu’s eyes are located behind his head to monitor mischievous children. Japanese people usually avoid offering red Christmas cards because red is linked to loss of life and mourning.

In Wales, between Christmas and New Years’, there is a custom that celebrates the Welsh skeletal horse spirit. A person from the village is nominated to impersonate the Mari Lwyd/Grey Mare ritual, where a mare’s skull is glued to a pole, roofed by a sheet to present a ghostly appearance, decorated with ribbons and bells and paraded around the community while villagers sing traditional Christmas songs. They knock on every door, singing and inviting the inhabitants to participate in a row of wits called a pwnco, which involves in trading clever rhyming insults. Ultimately, they are summoned inside for food and drink, and the presence of Mari Lwyd in the house brings fortuity for the coming year.

In Germany and Austria, the Krampus Night is marked on the 5th of December, the Eve of St. Nicholas Day where people get dressed up as scary figures to balance out the current sweet-tempered Christmas traditions. The anti-Christmas character is called Krampus, a demonic-looking beast with claws, horns and a lengthy tongue, said to be the son of Norse Goddess Hel. Like Grýla, Krampus carries sticks to hit ill-disciplined children and takes them to the Hell, while Santa gifts the well-behaved children.

In Austria, Frau Pertchta is frequently regarded as a female equivalent to Krampus. People dress in masks called perchten and dance around fires to chase away creepy winter ghosts. Frau Perchta is a giant, white-clothed woman or a frightening, haggard witch with one large, deformed foot, which refers to her shapeshifting powers. She rewards good children and leaves a silver coin in their shoe over the 12 days of Christmas but slices the stomachs of disobedient children removes their organs and swaps them with straw and pebbles.

There is a link between Frau Perchta and the Italian witch La Befana, she is a gaunt, aged witch. The story goes Le Befana was requested by the wise men to assist them, but she refused. Later on, she tried to approach them, but she was tired as it was a long journey to Bethlehem, so decided to rest underneath a branch of a tree that magically transformed it to a flying broomstick, so she could search for baby Jesus. Just like Santa, La Befana pays a visit to homes during the Feast of the Epiphany and gives candy and gifts in socks for obedient children. Troublesome children receive coal, dark candy or sticks. She sweeps homes with her broom before she disappears, brushing away the ordeals of the past year.

Another anti-Saint Nicholas, Pelsnickel dressed in frayed old attire and scruffy fur, clutching a bag full of delights and a switch. Pelsnickel visits households and if the children were courteous, they received gifts and candy. If they were ill-disciplined, they received coal and smack with the switch. In modern time, the switch is only used for noise, and to alert children to be good for Christmas.

In Alsace and Lorraine regions of France, Hans Trapp is a materialistic and sinful man who adored Satan and was expelled from the Catholic Church. In the end, his wealth was seized, and he was banished to the woods where he preyed upon children, masked as a scarecrow. He was about to devour a child he abducted when he was hit by a flash of lightning for pursing his evil ways. Finally, Hans Trapp became an acquaintance of Saint Nicholas, encouraging children to change their terrible behaviours or turn out like him.

In France and Belgium, Père Fouettard is a scruffy and rough-looking man with a long beard and initially an innkeeper or an unpleasant butcher who desired to eat children. He and his wife trapped three boys in his butcher shop, where he mugged, killed them by slashing their throats, hacked, and salted them. Saint Nicholas rescued and resurrected the boys. As a penance, he became Père Fouettard and accompanies Saint Nicholas, on St. Nicholas Day each year to punish disobedient children.

A hilarious Christmas custom originated in Germany, a pickle is concealed within the Christmas tree and the child who finds the pickle receives a gift. Alternative sources say that the pickle tradition derived in Spain when two young boys were held captive in a pickle barrel. These boys were saved by Saint Nicholas.

In Scandinavia, instead of Santa Claus, families leave Nisse who is a gnome that safeguards the family, a sweet rice porridge with butter (risengrød) on Christmas Eve and he will bring fortuity to the household. If they do not, then he will play tricks on the family or kill one of the family’s domestic animals.

In Japan, a proficient marketing campaign assured many Japanese people that fried chicken is a conventional American Christmas dinner, they book reservations to eat at a Kentucky Fried Chicken on Christmas Day and KFC online services have been created to accommodate everyone.  The meals are served in festive holiday packaging.

In Portugal, the traditional Christmas dinner is called Consoda, the family arranges additional places at the dining table for deceased family members and rarely crumbs are placed in the hearth. They believe that it will bring fortuity to the family.

In South African, parents tell their children about the story of a boy who tried to eat Santa’s cookies, who got caught by his grandmother and she murdered him. The ghost of the boy haunts the disobedient children at Christmas time. The story scares them from eating Santa’s cookies.

On Christmas Day in South Africa, people are fond of snacking on deep-fried caterpillars of the Emperor Moth.

The week before Christmas the residents of Guatemala cleans everything up in a huge pile outside because they believe that the devil and malevolent spirits dwell in the dark, filthy sections of their household. Ultimately, the statue of the devil is placed on the huge pile which is later set ablaze.

In Greenland, there is a special Christmas delicacy eaten raw called mattak (raw whale skin with a little blubber) and kiviak (wrapping a small arctic bird called auk in seal skin, buried for 3 to 18 months and the seal grease prevents it from spoiling).

In New Zealand, the Pohutukawa tree with ruby coloured flowers is used to create the prominent native Christmas tree and utilised for decorations.

Every year in Gävle, Sweden, Julbocken (the Christmas straw goat) is burnt to the ground on the town’s Main Square.

In the Netherlands, Eve of Sinterklaas is widely celebrated. It is believed that Sinterklaas delivers presents inside a shoe which is left at the fireplace, windowsill or on the doorstep for the children. However, his helper Zwarte Pieten kidnaps mischievous children in their sacks and returns to Spain. 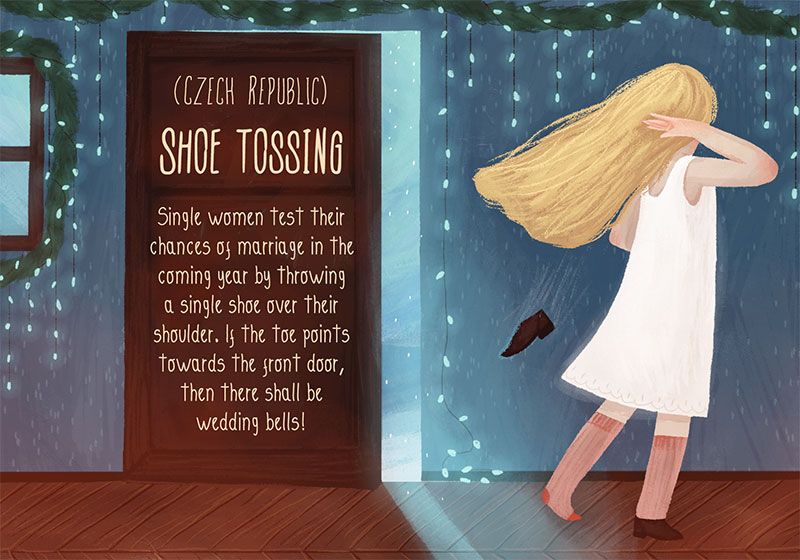 In the Czech Republic, women throw a shoe over their shoulder on Christmas Day. Basically, it can tell if she will be married sooner or later. If the shoe is pointing at the door, the lady is in luck.

Thank you for reading, fellow humans!

61 thoughts on “Christmas traditions from around the world!”